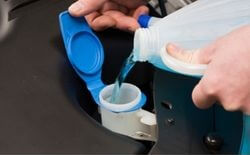 I am writing this blog post because I want to share something that my dad told me. He said that in the winter when your pipes freeze and burst, you should use RV antifreeze to thaw them out.

If you pour it down a pipe and then put a rag at the end of the pipe so it doesn’t drip, it will help melt through any ice or frost build-up in your pipes; which can save you from having to call a plumber.

Do you have frozen pipes in your home and are wondering how to thaw them?

This blog post will teach you the best ways to get rid of that frozen pipe problem.

As a winter storm carries on, pipes may freeze as the temperature drops. This can lead to burst pipes and flooding, so it’s important to be prepared.

There are many ways to prevent frozen pipes from happening in your mobile home, but if they do happen then you’ll want to know how to unfreeze them fast!

Antifreeze is a liquid that is added to the water supply in your mobile home or RV’s and it helps to prevent it from freezing during cold weather.

In most cases, an antifreeze mixture of 50/50 will work just fine but if you live somewhere particularly cold then you may want to use more or less than that.(Wikipedia.Com)

How do I thaw frozen pipes in RV & Mobile Homes?

There are many ways in which you can thaw a frozen pipe and some methods will work better in certain situations than others.

You’ll need to make sure that when you unfreeze a pipe, the water doesn’t rush out quickly as this could cause damage to your home or belongings.

Also remember that if there is any standing water in the pipe, it will need to be dumped out.

This is the best way to thaw a frozen pipe if the temperature is just slightly below freezing. You can use many different types of heaters, including space heaters and kerosene heaters.

However you choose to do this, just make sure that your heater is safe and won’t catch anything on fire or cause an electrical short in your mobile home. 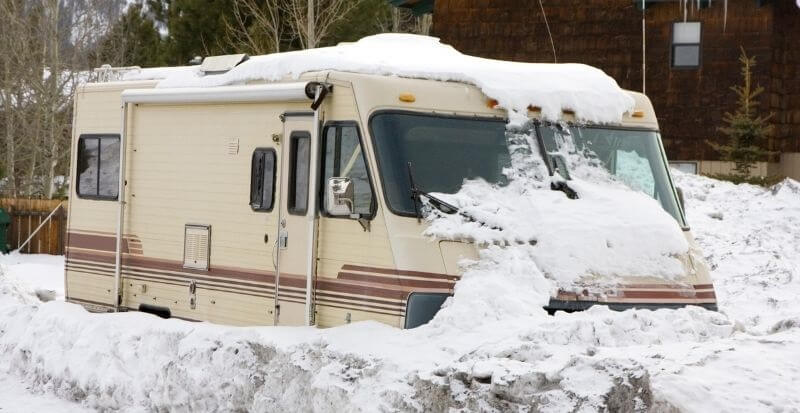 1) Open faucets so hot water runs through them for a few minutes each hour, until they unfreeze completely.

This method works well when there isn’t much ice build-up on your pipes, but don’t do it if standing is present in the pipes already.

2) Use fans to blow hot air on the frozen pipes until they thaw out. This method is less effective unless there are already small cracks in the pipes that you can help widen.

But it will also give your home an energy boost if you turn off most of the electricity during a snowstorm or cold front.

3) Wrap ice-cold areas with heating pads or blankets to melt away frozen patches. Again, this method works best with minor patchy ice build-up and it’s not great for larger areas with lots of frosting because it will likely take too long to work.

If there are any outlets nearby, make sure they are turned off before you start this process!

4) Pour hot water or near-boiling water directly onto frozen areas. It will take a little while to work and may not completely unfreeze the area, but it will help to prevent further freezing.

5) If you have an oven with a broiler in it, turn the broiler on and let it get hot. Then open your kitchen sink cabinet doors and stick the end of a faucet in front of the opening; this will catch most of the water that comes out during thawing.

Leave your cabinet doors open until all standing water has drained from the pipes. This method works well because it’s fast, especially if there are already small cracks in your piping system.

However it only really works for smaller piping systems without a lot of water in them. If there is a lot of standing water and you don’t have time to wait for it all to drain, then skip this method and move on the some of the others instead.

6) Use a hairdryer to warm-up areas that are frozen over until they thaw out. This may take a little while, but it’s one of the safest methods because you won’t be using any electricity or fire hazards.

7) Mix vinegar with hot water and pour it down your pipe system after turning off the main valve.

Regulating pressure in your piping system is important when heating systems are involved, so make sure that before anything else you turn off your central heating valves!

The vinegar will help prevent further freezing and a lot of people say that this method works well.

8) Put aluminium foil behind areas where piping starts so the heat from heating systems will bounce off the foil and warm up those specific spots instead of spreading throughout your entire home.

This is an effective way to avoid further damage or danger because it will only focus on a small area.

9) If you have a wood-burning stove, then put a pot of water on the stove to boil and pour it slowly down your piping system.

This will help melt away patches of ice that may be hanging around down there, but don’t do this if you have any electrical heaters nearby because you could run the risk of an electrical fire hazard.

10) Unhook your central heating system from gas or electricity, so it’s forced to use only the natural energy from its boiler.

This method is great for preventing further damage from ice build-up in your piping system, but it can take a long time before all standing water has drained out since it won’t be able to rely on any energy sources other than gravity.

Are there any other tips I missed out on? What are your best tricks for thawing RV frozen pipes? Let me know in the comments below!

I am a traveling journalist and content creator, in love with the world of Mobile Homes & RVs. I spend my time filling up on new adventures, and sharing them with you so you can feel inspired to travel too! Every experience is different and at the end, we are all tourists of our own lives.

link to Are Campers Allowed In National Parks?

National parks are a great place to camp, but are pop-up campers allowed in them? Depending on the park, they may be allowed in some areas and not in others. This blog post will provide an overview...

Continue Reading
link to Do Class B Motorhomes Have Bathrooms?

Many people look into purchasing a class B motorhome because of the many benefits they offer. But one question that often comes up is whether or not these vehicles have bathrooms. There's a common...